No one deserves to face their creation with an out-dated look, especially if plentiful time and energy is devoted into that creation. For college students that are taking introductory courses, they might not possess the required experience or techniques to always make their deliverables look pretty (or that might), despite the amount of work they have put in to finish their homeworks or projects. In such a scenario, it is then the teaching staff’s job to make their work well paid for with carefully designed homework/project material, to maximize their sense of satisfaction and therefore encourage their engagement in the course.

Recently when I was TA-ing for CS145, Introduction to Databases, we used the project from previous quarters, which asks the students to create the model of a database system, where certain constraints need to be satisfied at all time, when retrieval/modification tasks are performed. When I looked at the website starter code we were about to give out to the students, they appeared as old as the course itself to me (which apparently has been around for a while). Although in previous offerings of the class, the students are apparently encouraged to be creative about how their final project websites look like, I felt it would be quite unfair for students who have devoted about the same amount of time designing the databases (which, in my opinion, should be the whole point of the project) to have to stare at the outdated Web User Interface (UI) provided with the starter code.

So I decided I would re-design the starter code with Bootstrap CSS, which not only gives the template website a more mordenized appearance, but also incorporates full-fledged responsive features into the pages. 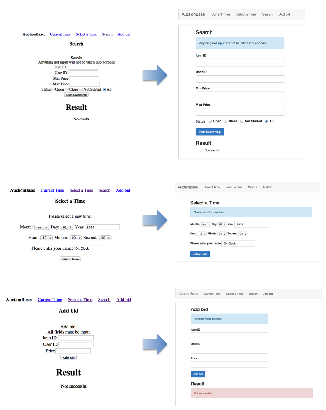 Unless otherwise mentioned, you are free to share my posts under the Creative Commons Attribution-ShareAlike 4.0 International License (CC BY-SA 4.0). blog comments powered by Disqus